In short: AT&T expanded the availability of its 5G Evolution network to 99 new markets across the United States, the company said earlier this week. The chart-map combo below lists all cities whose residents now have access to what’s essentially a 4G LTE network, albeit designed in a way that will facilitate the eventual 5G upgrade AT&T is planning to perform. Thirteen devices sold by AT&T can currently communicate with the firm’s latest network tech, with the best sellers on that list being the Samsung Galaxy S8, Galaxy S9, LG V30, V35 ThinQ, Motorola Z2 Force Edition, and the Netgear Nighthawk Mobile Router. The incoming LG V40 ThinQ will be able to leverage the technology as well.

Background: AT&T faced significant criticism due to its decision to advertise the new network as a “5G” affair given how the service is based on existing 4G LTE standards. The carrier remains adamant that moniker is self-explanatory and clearly points to the fact that the network in question has been designed with 5G upgrades in mind. AT&T is expected to win the mobile 5G race in the United States by launching an experimental wireless service across twelve cities later this year. While Verizon is technically already offering a commercial 5G solution since Monday, its service is a fixed wireless access affair, meaning it’s a broadband alternative and not a new cellular network. Likewise, as it’s based on proprietary standards, Verizon’s 5G Home network is hardly scalable and won’t be the basis for the firm’s mobile 5G network scheduled to start rolling out next year, relying on non-standalone standards from the 3GPP.

Impact: Despite criticism about misleading marketing, the expansion of 5G Evolution suggests AT&T remains on course to offer the first cellular 5G service in the U.S. While early adopters will have to rely on “pucks” — hotspots — to communicate with the network this fall, the first 5G-enabled Android smartphones are set to launch in the country early next year and should allow consumers to take full advantage of AT&T’s latest wireless advancements. 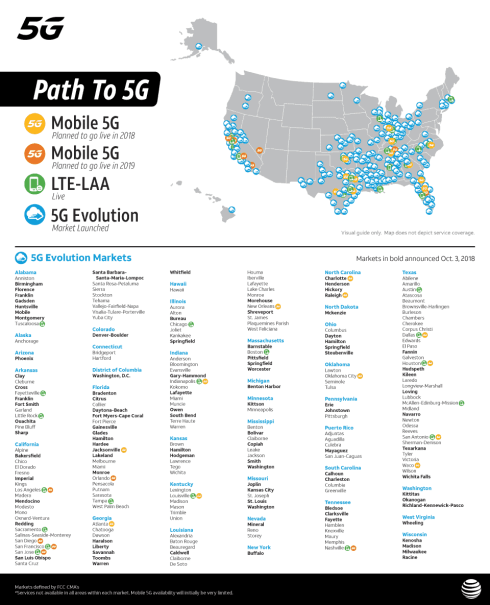