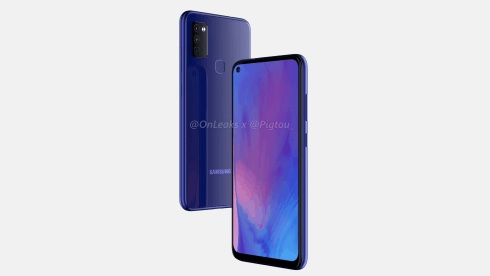 The Samsung Galaxy M51 will opt for a cheaper display solution, it seems. This information comes from Ross Young, a well-known analyst, who is usually spot on when it comes to such information.

He claims that the Galaxy M51 will utilize OLED displays from China Star, and ditch Samsung Display, essentially. That will allow Samsung to offer the device at an even lower price tag.

Display shipments for the Galaxy M51 will allegedly kick off in July. What's interesting here, is that this will become the first Galaxy smartphone with an OLED display that is not from Samsung Display.

The Samsung Galaxy M51 did leak back in March. OnLeaks and Pigtou shared some renders of the device, and basically revealed its design. We thought that the phone will arrive by now, but that did not happen.

In any case, the device will be made out of metal and glass it seems, unless Samsung opts for polycarbonate. The device will include a fingerprint scanner on the back, and a camera module placed in the top-left corner of its back.

The phone's bottom bezel will be noticeably thicker than the rest of them. A display camera hole will be placed in the top-left corner, while the physical keys will sit on the right.

Samsung's branding will sit on the back of the phone. The phone will include a flat display, in case you were wondering. Its back side won't be curved, but its sides will.

The device will feature a 6.5-inch Infinity-O display

It was also mentioned that the phone will feature a 6.5-inch Infinity-O display Its dimensions were also mentioned, it will allegedly measure 162.6 x 77.5 x 8.5mm (9.5mm including the camera bump).

The phone also surfaced on Geekbench not long ago. That listing revealed that the device will be fueled by the Snapdragon 675 SoC.

That listing also revealed that the phone will include 8GB of RAM, and ship with Android 10 out of the box. Samsung's One UI 2.1 will be included on top of it.

A 64-megapixel main camera will be included on the back, with a sensor from ISOCELL. A 5,000mAh battery will also be a part of the package, and the device will support 15W charging.

Two SIM card slots will also be included, while that display that we mentioned earlier will probably be a fullHD+ panel. That is basically all the information we have at the moment. The device may launch in July or August.