Skip to content
Posted on June 30, 2020 by Sumit Adhikari Posted in All News, Samsung, Wearables News 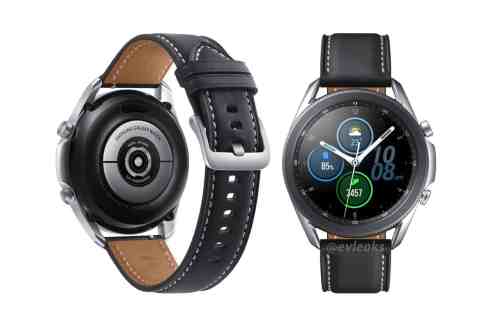 A whole lot of Samsung Galaxy Watch 3 feature details have leaked online. Max Weinbach of XDA Developers has been able to get his hands on the Galaxy Watch 3 firmware and shared a host of information on Twitter.

According to Max, the new Samsung smartwatch will come with more customizable watch faces. Samsung will reportedly offer new watch faces with customizable 'Informative Digital Edge'. Users will be able to add information such as heart rate, steps, weather, battery level, and more towards the edges of a watch face.

The Galaxy Watch 3 will also feature a new Weather app that shows matching backgrounds to the current weather condition. So if it's raining, the background on the weather app will feature raindrops or something matching. The upcoming smartwatch will also get a new music widget.

The two companies have an increasingly cozy relationship. Some of the recent developments include Samsung integrating the 'Link to Windows' feature to its One UI and shipping its smartphones with several Microsoft apps pre-installed.

We already know that the upcoming Samsung smartwatch will have 8GB of internal storage space. According to Max, about 5.2GB of that MMC storage will be available to users.

He further confirms that both Wi-Fi-only and LTE variants of the watch will feature a loudspeaker. Samsung isn't including MST support on this watch, so users will have to rely on NFC for contactless payments.

The Galaxy Watch 3 is expected to arrive sometime in July, most probably on July 22. However, Max expects Samsung to unveil the smartwatch as early as July 8, with the Galaxy Buds Live accompanying it. We'll have to wait until an official announcement from Samsung, though.

The upcoming Samsung smartwatch will be available in two sizes, 41mm and 45mm, featuring a 1.2-inch and 1.4-inch display respectively.

The Galaxy Watch 3 features an IP68 rating with 5 ATM water resistance. Samsung has not yet confirmed when it's going to unveil the new smartwatch. However, all these developments suggest an official announcement isn't too far.