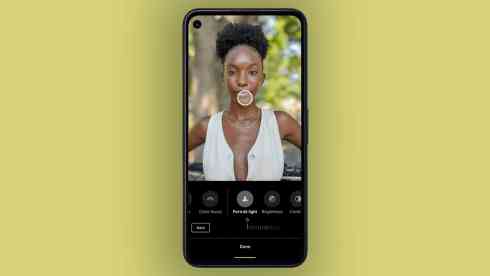 It took a while, but Google finally revealed the secret to Portrait Light, a magical Pixel series camera feature. Nearly three months after originally introducing it, the company disclosed that the key to this incredible tech was – legwork. Or LED work, to be more specific.

Namely, the Googlers involved in the project went to incredible lengths to gather quality data for training the machine learning models powering Portrait Light. The pinnacle of their efforts was a full-fledged light stage for 360-degree portrait photography. Built using 331 individually programmed LED lights, this is where most of the Portrait Light magic happened over many months.

The light stage was surrounded by 64 spherically arranged cameras, each supported by its own directional LED cluster. A brief portrait session that looks like something straight out of The Matrix hence provided Google with plenty of data to feed to its machine learning models.

All of that legwork ultimately helped Portrait Light simulate the look of an off-camera flash. Which has been an iconic portrait technique for nearly a full century by now. And the cool thing with machine-generated imagery is that this magic also works with pre-existing photos. In other words, it doesn't need to happen in-camera. After all, this computer vision tech is simply filling in the blanks using its imagination.

Portrait Light is yet another showcase of Google's AI dominance.

Besides texture detail, the tests were specifically geared toward capturing color and reflection variance across the dome. From there, the trick was to simply gather a sufficient volume of data. Naturally, while striving for maximum variety in terms of face shapes and skin tones. The actual machine learning sessions were powered by the company's own supercomputers, Google's AI unit said.

Ultimately, the Portrait Light functionality is believed to be pretty close to peak consistency. At least based on this particular iteration of Google's neural models. Needless to say, it's likely only a matter of time before Google iterates on this tech. Primarily because scalability is one of the defining traits of modern machine learning solutions. And machine learning is the backbone of all things Google nowadays.

Meanwhile, these magical relighting algorithms just recently rolled out to older Pixel devices. The feature trickled down to smartphones as old as the 2017 Pixel 2 range via Google Photos.