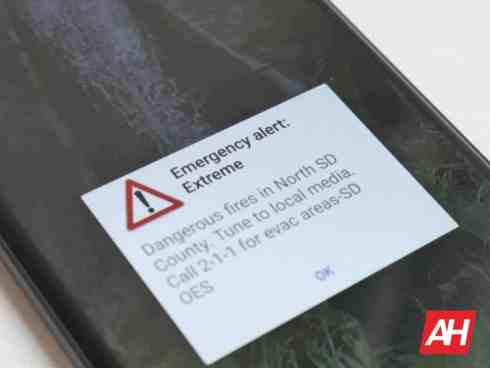 Google has been hard at work trying to bring early earthquake warnings and alerts to Android at the system level as part of Google Play Services. That's based on a recently reported tear-down of the app by 9to5Google, showing the progress made so far.

The alert system appears to be based on ShakeAlert, which is funded by the US Geological Survey and others. That means, at least in its earliest incarnation, the feature would primarily apply to the West Coast. As with other early alert systems for earthquakes, the goal here is straightforward. Namely, the company hopes to integrate into that system so that users can be warned at the first signs of trouble. The alerts are based on early tremor detection and associated algorithms for predicting larger quakes.

How much progress has Google made introducing earthquake alerts to Android?

This would essentially bring the functionality of apps such as LA's ShakeAlertLA or UC Berkley's MyShake to the system-level. Android would utilize users' approximate location to deliver the notifications. Those, as noted above, would be driven in turn by ShakeAlert's sensor arrays.

Depending on the epicenter of the quake, two separate alerts can be presented. The first type of alert warns of imminent shaking. It tells users to expect shaking to begin soon and provides details about the magnitude of the quake. The second type of alert mentions how far away the earthquake is and how strong it is.

There's no current mention of a map in the notifications but it's though Google will include one behind a tap on the notification. That's a common practice among the best of earthquake apps.

Additionally, Google has outlined some key information associated with the app. That would be displayed to users upon introduction to the feature. The feature will warn users that magnitude and intensity are estimates and also that alerts won't always arrive ahead of the quake. That's mostly going to depend on the magnitude, how much advance warning tremors allow for, and where the epicenter is.

Moreover, the feature warns that not all earthquakes can even be detected in advance.

Users of the feature are reminded that it's a good idea to make a plan for the eventuality. That includes, as many Californians already know, identifying potential hazards and securing objects that could become hazards if moved during a quake. The alerts may also be used to predict and warn of aftershocks.

If this works, Google will undoubtedly expand on it further

Based on previous statements from the US Geographical Survey, the system could be a big deal if it works. The organization has previously indicated that the "seconds" or even "tens of seconds" of advanced warning can mean the difference between life and death. That short time span gives people and systems that counter or respond to earthquakes an advantage of time. That time, consequently, saves both life and property.

So it isn't entirely shocking that Google is working to implement the system, even if it would only initially be useful to a relatively small percentage of users. That could expand if it proves successful though. Direct integration could improve the time-lapses involved since it bypasses the standard SMS-based methods. Those can, in areas or at times of high congestion, be severely delayed. There are other apps that can be used as well. But with system-level early earthquake alerts from Google, that problem may be at least partially solved.

That would likely prompt the company two work with similar surveys in the US and abroad. And, may ultimately lead to further integration with early warning systems for other potential disasters.