Skip to content
Posted on August 7, 2020 by Daniel Golightly Posted in All News, SamsungTagged 8212 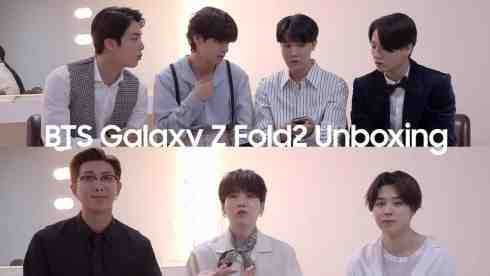 Samsung has turned to one of the biggest K Pop groups around, BTS, for an unboxing of its upcoming Galaxy Z Fold 2. The combination of an upcoming future-forward device and, like it or not, one of the fastest-growing music categories around is fitting. This is, after all, only the second in what could be a long line of folding smartphones going forward.

Of course, the primary focus of the video, as noted by the source, appears to be as both a showcase of the reaction to the device. Those are entertaining enough to warrant a watch all on their own. But the video also focuses on some of the changes Samsung has made from the last iteration.

Like the tablet-phone hybrid itself, unboxing the bleeding-edge Samsung Galaxy Z Fold 2 is like opening a book. The folds of the box are opened outward from the center to reveal the gadget itself — which comes out opened up. And, of course, Samsung is highlighting its new Mystic Bronze coloration for this device. The color was also utilized as the main hue for the Samsung Galaxy Note 20 series.

As described by the gentlemen of BTS, the color is "incredible" and that's entirely by design. Samsung has indicated that the color was chosen as a step away from the 'energy' exuded by the Galaxy Note 10 series' Aura colors. Instead, the South Korean tech giant was focused on simplicity and colors that had more staying power. But BTS wasn't just concerned with color by any stretch.

The texture of the materials used has improved significantly too, particularly on 'grip', the group notes. And the in-hand feel is accentuated by how much more smoothly Samsung Galaxy Z Fold 2 flexes and folds. At least as compared to its predecessor — which was plagued by initial hinge issues.

Opening up the device, the group notes that it's also wider and that undoubtedly helps with grip. But it also makes the device more akin to a small tablet when opened up. Better still, its larger exterior display is going to be much better for day-to-day use — even without accounting for the near bezel-free redesign. And the internal display will be more suitable for gaming or watching entertainment media.

Samsung hasn't announced this device yet but it should soon

Now, the Samsung Galaxy Z Fold 2 is still very much a device under wraps. That's despite the fact that there's already so much that's known about the gadget. And despite several major teasers at the recent Samsung Galaxy Unpacked 2020 event. The company plans to launch and open pre-orders for the device on September 1.