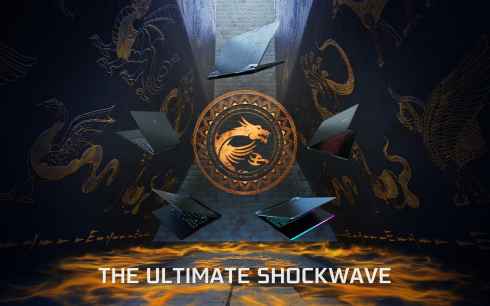 MSI today unveiled its latest refresh of gaming laptops that would all be coming with NVIDIA 30 series graphics cards.

While most of the laptops that it showed off during this morning's live stream event are newer iterations of existing machines, it did have at least one new product to announce. The Stealth 15M. Which is the world's thinnest gaming laptop.

While gaming laptops have come a long way over the years in terms of scaling down the thickness and weight, they could always be thinner and lighter. MSI sought to achieve that goal with its thinnest laptop yet in the Stealth 15M.

Aside from the thickness which is 16.15mm, it also only weighs 1.7kg which is just about 3.7 pounds. On top of all that the Stealth 15M is powered by the NVIDIA RTX 3060 graphics card. Which makes this a really good option for a gaming laptop for anyone that needs a machine that is just as mobile as it is capable of playing games.

For those that are more concerned with power and performance as opposed to portability, the existing gaming laptops from MSI all now come with NVIDIA RTX 30 series graphics cards as well.

While MSI does still have older models available, it won't be selling them for long. Which means you'd have to grab them from third-party retail partners.

Included in the 2021 laptop refresh are the GE series, with the GE76 Raider and GE66 Raider, which can come with Intel Core-i9 CPUs and up to an NVIDIA RTX 3080 GPU. They also now support WiFi 6E.

Which means even faster and more reliable signal strength for your home internet connection if you have a router that also supports WiFi 6E. Like the new NIGHTHAWK model from NETGEAR for example.

MSI has even more options for gamers

MSI is intent on covering all its bases by making sure there's a gaming laptop for just about everyone. The GE series laptops are its most powerful options. While the new Stealth 15M is its thinnest, making it the perfect option for those who want the most portable gaming laptop they can get.

But MSI also announced 30 series models of the GS line which includes the GS66 Stealth, as well as the GP line that includes the GP66 and GP76 Leopard.

The GF series laptops, like the GF75 and GF65, are getting the 30 series refresh too. And then there's the Creator 15, which MSI has aimed squarely at content creators, packing in things like a calibrated 4K true pixel panel and 100% Adobe RGB color gamut.

It even launched a new special edition version of the GE76 Raider called the Dragon Edition. Though the specs are the same as the standard GE76 Raider. Some or most of these laptops should already be available for pre-order. However there are no specific dates mentioned for an exact launch date.

If you're interested in seeing these laptops first-hand you can watch the even from this morning in the video below.