Today, Google debuted a slew of new products, including the Pixel Slate, which is the company’s first tablet running on Chrome OS. Now this isn’t a surprise to see Google rolling out a tablet that runs on Chrome OS, seeing as tablets in general are pretty much dead. And Android tablets are not all that different from Android smartphones. So slapping Chrome OS on a tablet is a good thing for Google, and it makes the tablet a bit more productive. The Pixel Slate looks to be a pretty high-end tablet from Google, and comes with a high-end price tag too, of $599, though Google is throwing in some free YouTube TV with the purchase, so it’s not as bad. But is the Pixel Slate really worth that price? For many people, it’s not. But for some, it will be more than worth the price. And those people are those that use the Microsoft Surface, or want something like the Surface.

The Pixel Slate is aiming to offer something that the Pixelbook and other Chromebooks can’t, and that is productivity and portability rolled into one device. Now many will argue that Chrome OS isn’t made for productivity. And normally, that would be true. But remember that Chrome OS now has Android apps included, which is going to make the experience of using a Chromebook much better. This is because you’ll have full Microsoft Office available on your Pixel Slate, as well as a number of other apps. Now will it replace everything that a PC or Mac can do? Of course not. But for many people, it can replace that machine for them. And the Pixel Slate can do two things for them, act as a Chromebook with the Keyboard dock, and then act as a tablet for watching movies, playing games and such without the Keyboard dock. Giving people the best of both worlds, which is what the Microsoft Surface does as well.

By being portable, the Pixel Slate can be taken anywhere, like the Microsoft Surface can be, which makes this Google’s attempt at competing with Microsoft’s Surface. It’s not the best attempt at competing with Microsoft, and that’s because this is running Chrome OS still. But with the impressive battery life of Chrome OS tablets and laptops, you can really get some work done without needing to carry around a charger, something that cannot be said about the Surface. Is the Pixel Slate for everyone? Nope. But it will be great for many people out there. 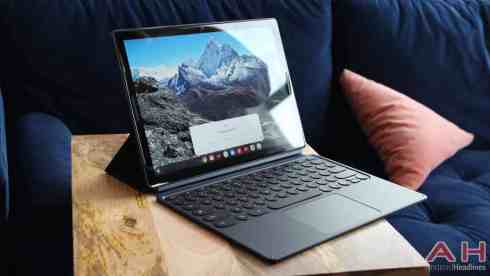 There has been much talk in the past few years that Google would merge Chrome OS and Android. While Google has steadily denied that, it did add fuel to the fire when it brought the Play Store over to Chrome OS last year. And that is effectively what killed Android tablets, at least in Google’s mind – Samsung is still putting out pure Android tablets in the Galaxy Tab S4 and Galaxy Tab A. But by putting out a Chrome OS tablet that features Android apps, Google is able to give everyone the best of both worlds. Being able to be productive by having a full Chrome browser available, with a file manager and some actual storage, but also having Android apps and games available as well. Now that’s not to say that Chrome tablets will do better than Android tablets have done, but it is a starting point.

This isn’t Google’s first attempt at a Chrome OS tablet. The last Android tablet it made – the Pixel C – originally was meant to be a Chrome OS tablet, but was ultimately scrapped and turned into an Android tablet because it couldn’t get Chrome OS to run properly on the tablet in time for the launch. Now it appears that Google has gotten those issues squared away. Of course, the Pixel C launched before Android apps were on Chrome OS, so that could have also been a big sticking point for the product.