In short: Samsung has announced its first “Always On” Chrome OS device with the launch of the new Chromebook Plus V2 (LTE), set to become available on November 2. The gadget, which is aesthetically exactly like the recently launched Samsung Chromebook Plus V2, is priced at $599.99 and will be available for purchase through Verizon, Best Buy, or Samsung’s own website. A short video was released alongside the announcement touting a few of the 2-in-1’s features and a bottom-mounted SIM slot, with Cat 9 4G LTE connectivity driven by an unspecified Intel-built wireless solution. That means the new Chrome OS laptop could be capable of download speeds maxing out at 450Mbps and upload speeds of up to 55Mbps.

Background: The “Always On” moniker is a fairly recent addition to Chrome OS marketing terms and is intended to compete with similar features found in some Windows-based machines. In effect, an Always On Chromebook allows users to install a SIM card or use an eSIM to stay connected at all times via a mobile network just like a smartphone. The Korean tech giant hasn’t explicitly said whether or not that will only work with Verizon’s network but that may be the case since the carrier is listed as a partner on the new device.

Aside from the SIM slot, the new Samsung seems to be functionally identical to the Chromebook Plus V2. Other features touted in the video include mention of a camera with a f/1.9 aperture for low-light circumstances, Intel Celeron processors, and Samsung’s S-Pen stylus. The camera is placed just above the keyboard so that it can act as a rear-facing main snapper when the 2-in-1 is flipped into tablet mode while the stylus touts 4,096 levels of pressure sensitivity and tilt angle recognition. If everything has stayed the same with this build, that will be a 13-megapixel shooter, as compared to the 1-megapixel webcam module positioned above the 12.2-inch 1920 x 1200 display. The processing unit, meanwhile, would be an Intel Celeron 3965Y, clocked at 1.5GHz and backed by 4GB RAM and 32GB storage. Similarly, that would mean that the spill-resistant metal frame of the device would house two USB Type-C ports, a micro SD card reader, two stereo speakers, and a 3.5mm headphone jack.

Impact: As with the shift from Samsung’s previous Plus-branded Chromebooks to the second iteration, the new device doesn’t seem to be much of an update. That isn’t too surprising since it seems to be part of a larger approach Samsung is developing for its Pro and Plus line of Chrome OS laptops. It does add $100 to the price without factoring in the cost of a data plan as well but the company is among the first manufacturers to include mobile connections in a Chromebook. Prices will likely start to come down as more OEMs begin to add the feature. 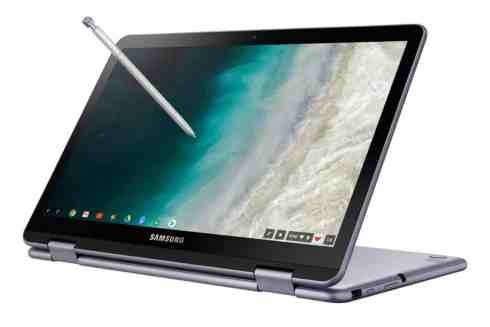