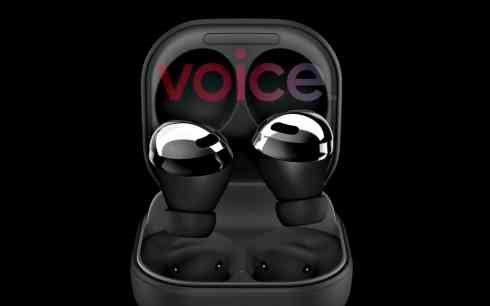 Another day, another Galaxy Buds Pro leak. Official renders depicting Samsung's next pair of wireless earbuds have been making the rounds for a while now. Primarily thanks to one person: Evan Blass, the famous industry insider and serial tech leaker.

Things aren't any different this time around, either. Credit for the image featured above still goes to Blass, the Galaxy Buds Pro earphones still look sleek.

Now, this should be the final Galaxy Buds Pro iteration to leak ahead of the wearable's official launch. As it's the final one Samsung intends to launch at its next Galaxy Unpacked event. Speaking of which, the said happening is said to be taking place on January 14th, as per the latest report from earlier this week.

Naturally, the Galaxy Buds Pro won't be the star of the show. That honor is reserved for Samsung's next trio of Android flagships: the Galaxy S21, Galaxy S21+, and the Galaxy S21 Ultra.

Is Samsung referencing Star Wars 1, Persona 5, or something else entirely?

As for the name of this perfectly ordinary, glossy hue of black seen above – it's Phantom Black. Is that a Star Wars reference? Hopefully not, as the Phantom Menace certainly isn't worthy of any homages.

The previous two Galaxy Buds Pro leaks point to that being the case, as well. As a reminder, Samsung is also expected to launch the Phantom Silver and Phantom Violet variants of the Galaxy Buds Pro. So, this is more likely to be a Persona 5 reference than a callback to 1999. Either way, Samsung remains faithful to its long and storied tradition of giving silly names to simple colors. All in pursuit of that extra brand value, or whatever. Because there's nothing phantom-y about this hue of violet.

Fortunately, the Galaxy Buds Pro should offer much more palpable answers to questions about why Samsung is launching what feels like its 7th pair of wireless earbuds since summer. As Samsung's gadget will reportedly boast improved audio quality and longer battery life compared to the Galaxy Buds Live. That's on top of existing premium features such as active noise cancellation supported by every Galaxy Buds model to date.

Lastly, Blass also provided us with this high-res side-by-side look at all three Galaxy Buds Pro colors that you can see below. With that, the only big remaining unknown is the price of these shiny-looking things.