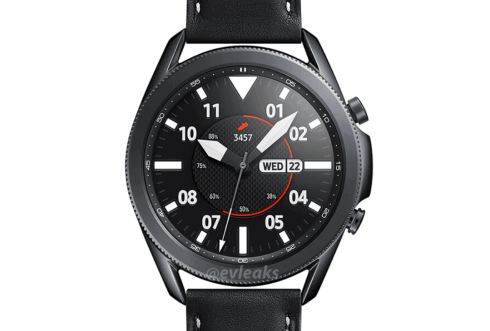 For the last few months, there are several rumors about the upcoming smartwatch from Samsung. The recent leaks confirmed it to be the successor to the 2018-launched Samsung Galaxy Watch. As per the latest information from reliable leakster Evan Blass, the new Galaxy Watch 3 could be officially launched on July 22.

Samsung seems to announce its new smartwatch just ahead of the Galaxy Note 20 series launch.

The Galaxy Note 20 lineup and Galaxy Z Flip 5G are reportedly launching on August 5. However, we still need to wait for the official confirmation from Samsung regarding the Galaxy Watch 3 official launch date.

While the Rose Gold variant comes in 41mm size, the Black variant will be available in 45mm size.

According to the source, the Galaxy Watch in the Rose Gold color will be officially introduced as Bronze. Also, the Galaxy Watch 3 in Black and Bronze colors recently appeared in the leaked high-quality press renders.

Even though the upcoming Galaxy Watch comes in slightly smaller form factor, it packs a bigger battery than its predecessor. Based on the rumors, it could sport a 1.4-inch super AMOLED display and include 1GB of RAM and 8GB of internal storage.

This will also be the first titanium Galaxy Watch

The company is also bringing back the physical rotating bezels with the Galaxy Watch 3. For the first time, Samsung might even introduce its smartwatch with Titanium casing.

However, the Titanium variant will obviously be priced at a premium when compared to the likes of aluminum and stainless steel variants.

We can also spot two physical buttons on the right side of the circular dial. The Galaxy Watch 3 will be using Gorilla Glass DX glass for protecting the display. It also comes with IP68 certification for water resistance up to 5ATM and MIL-STD-810G certification for military-grade durability.

Just like previous Galaxy smartwatches, the upcoming Galaxy Watch 3 also runs on the proprietary Tizen OS. It will also feature an electrocardiogram (ECG) sensor. The Galaxy Watch Active 2 is the first Samsung smartwatch to launch with an ECG sensor.

It can be charged using any Qi-certified wireless chargers or the smartphones with a reverse wireless charging feature. The LTE variant of the Galaxy Watch 3 will be coming with eSIM support.