Skip to content
Posted on February 23, 2021 by Sumit Adhikari Posted in All News 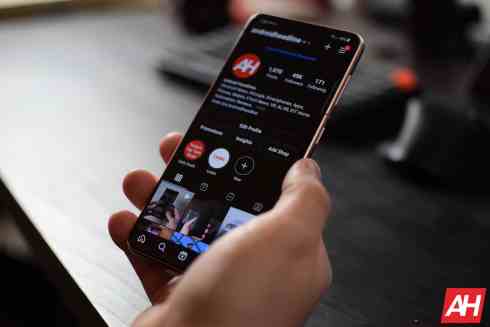 Market research firm Gartner has just published its smartphone sales estimates for 2020, and it tells the same story. Global sales of smartphones declined 12.5-percent year-on-year (YoY) in 2020, owing to an unprecedented slowdown because of the COVID-19 pandemic.

Huawei, as you'd expect, suffered the worst damage among the top five vendors. The beleaguered Chinese giant, which is now fighting for survival following the US sanctions, saw its sales volume drop a significant 24.1-percent this past year. Since the company has lost access to Google's applications, it is struggling to sell devices outside the home country China. As a result, its market share dropped from 15.6-percent in 2019 to 13.5-percent in 2020.

This allowed Apple to leapfrog Huawei into the second spot. The Cupertino-based iPhone maker registered a minor 3.3-percent growth in sales volume in 2020. Its market share also grew from 12.6-percent in 2019 to 14.8-percent this past year.

Samsung also experienced a YoY decline of 14.6-percent in 2020. However, since the overall smartphone market was on the decline this past year, it hardly affected the Korean giant's position at the top. It's still the No. 1 global smartphone vendor with a market share of 18.8-percent.

Xiaomi is another OEM reaping benefits from Huawei's trouble. The Chinese company, known for its Mi-branded smartphones, experienced a significant 15.7-percent YoY growth in smartphone sales in 2020. It captured 10.8-percent of the global market. 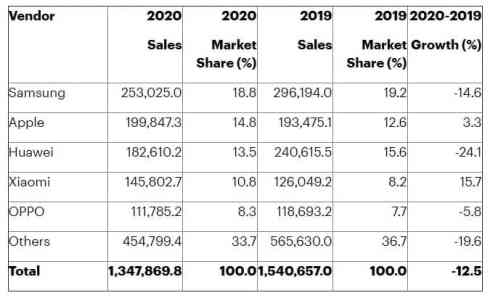 Along with its smartphone sales estimates for 2020, Gartner also published a data estimate report specifically for the fourth quarter of the year. Although the sales volume declined YoY, the market showed signs of recovery. A YoY decline of 5.4-percent in Q4 is much lower than a 12.5-percent decline for the whole year.

Apple, which usually performs best during this period, topped the chart in Q4 2020. Its sales volume increased 14.9-percent YoY during the period between October to December last year. Samsung suffered an 11.8-percent decline and slipped to the second spot.

Xiaomi and OPPO also registered significant growths in sales volume in Q4 2020. Huawei, meanwhile, was once again the worst performer as it suffered a whopping 41.1-percent YoY decline in smartphone sales this past quarter.

Overall, a total of 1.35 billion smartphones were sold globally in 2020, down from 1.54 billion units in 2019. Gartner expects the smartphone industry to rebound to the 2019 level this year, with sales volume expected to exceed 1.53 billion units. 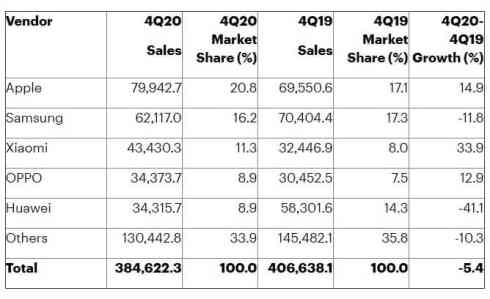